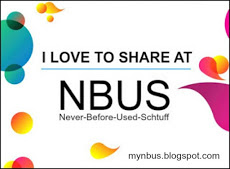 I didn't think I'd be away this long for nearly a week and a half, but a couple weeks ago that week was full of postings.  I thought I'd give you a break, lol!  I know with design team assignments it seems there are many postings at once.  And, to add a hop, too, it was a lot for that week.  Anyways, I'm working on birthday cards for next month.  I have made some stamp/die purchases recently and have a card to share with you that I made for my friend, Karen.  I'm entering this card over at NBUS. 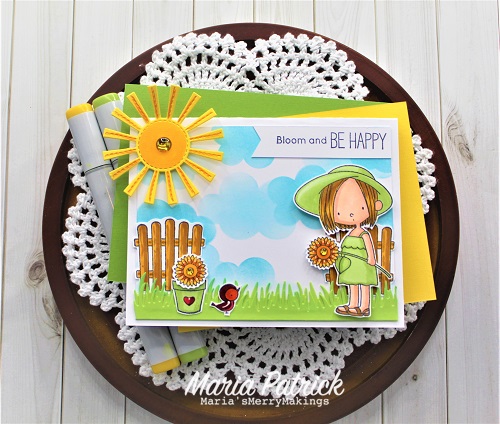 I love MFT and all the images are from MFT.  The new stamp set is called Sunflower Sweetheart.  I adore the sweet girl image holding the sunflower, so cute!  The stencil for the clouds are from Pretty Pink Posh.  And, the gems are from Pink & Main. 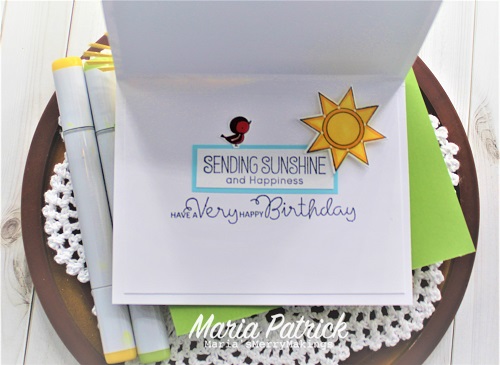 Well, during this stay-at-home time, I have been doing the usual of making and sending cards.  Also, I have been trying some new recipes.  What have you been up to?

The photo below shows a chocolate banana cream pie that I made just the other day.  It is so yummy!  The recipe called for vanilla pudding, but I think next time I'll try banana pudding.  It got double coconut and it's a good thing that I toasted enough, lol.  Because while I was making it, I forgot to add the whip cream.  I put the coconut on top of the pudding.  The hubby was in the kitchen and I was talking to him.  I don't know about you, but I get easily distracted when I'm cooking and baking in the kitchen.  Usually I say everybody outta my kitchen, lol!  But, it was an easy fix and so so yummy! 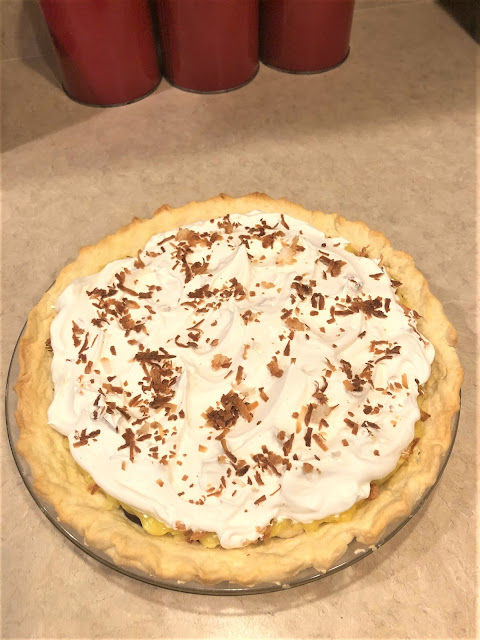 Ok, friends that's all for now!  You take good care and thank you so much for dropping by today!

Posted by Thanks for stopping by! Maria at 2:29 PM 7 comments: 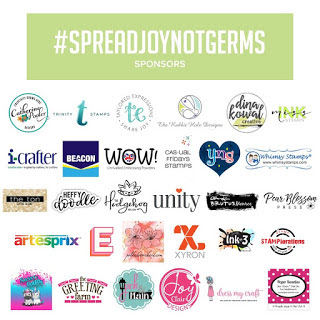 Paper Sweeties decided to join the #Spreadjoynotgerms official Blog Hop!  Everyone knows that during these trying times spreading some joy is much better than spreading germs! The organizers of the hop are Catherine Pooler and Hedgehog Hollow!  As you can see above, lots of sponsors with lots of fun prizes are up for grabs!!!

THEME:  Happy cards to make someone smile and to inspire people to send their hand made cards at this time.

WHEN:
Blog Hop goes live on April 17th 9am Eastern.

PRIZES:
Paper Sweeties is offering a $50 Gift Certificate!!  There are 31 Sponsors!!  The prizes will be randomly drawn from all the blog and all the comments.  We encourage you to leave as many comments on as many blogs as you can!  Some of the companies are offering discounts and freebies.

DEADLINE FOR ENTRY:  April 24th for prizes.  Winners will be announced on Monday, April 27th on Catherine Pooler's and Alexandra's blogs(Hedgehog Hollow) 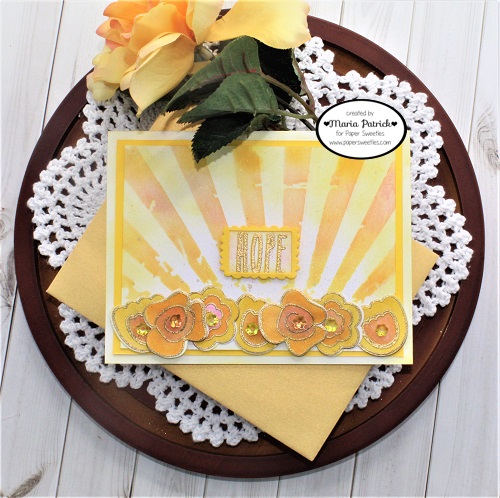 For my card, I started with a white card base and paired it with yellow.  The background was made using a Tim Holtz stencil.  The hope sentiment was gold embossed, which is from the Paper Sweeties set Merry and the flowers are from the set Pretty Posies.  I used Sweet Cuts-Rectangle Scallop Frames to frame the sentiment.  Sequins of cookie dough and creamsicle were added to the center of the flowers.  Gold Perfect Pearls Mist was sprayed to the card for the final touch.

If you get lost along the way while hopping, you can go to Catherine Pooler's blog or Hedgehog Hollow blog.

You will continue with the main blog hop by visiting Jess Francisco's blog next! 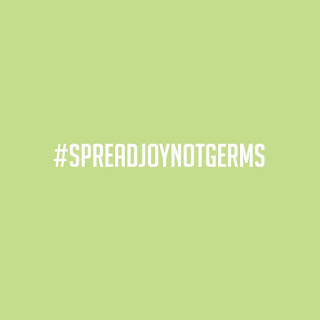 We hope you enjoy the hop and spread joy!  Thanks so much for dropping by today!  Take care and stay safe!! 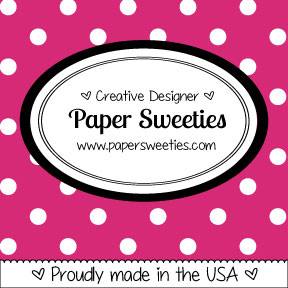 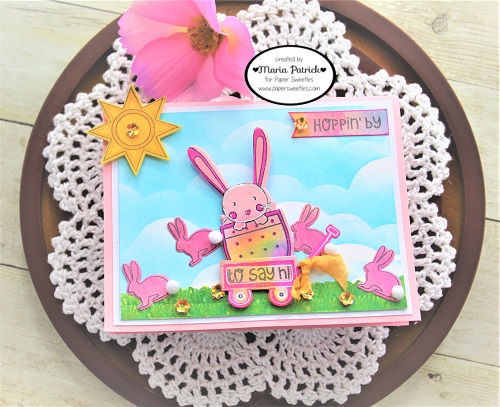 For my card, I started with a pink card base and paired it with white.  The bunnies are from the new set Just a Note.  The clouds were made using broken china distress ink.  All the images were colored with copics except the egg and sentiment.  They were colored with distress inks.  Gold Perfect Pearls Mist was sprayed on the images for interest.  The grass was made using Treat Box Add on:  Home & Garden.  The sun is from the set Island time.  The wagon is from the set Wagon Add-on:  Bloom & Grow.  Ribbon(Creamsicle) was tied to the wagon.  Sequins(Creamsicle) added to finish the card. 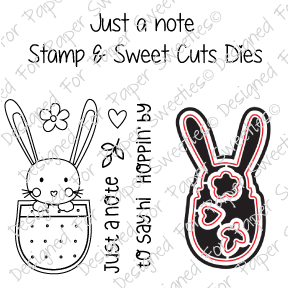 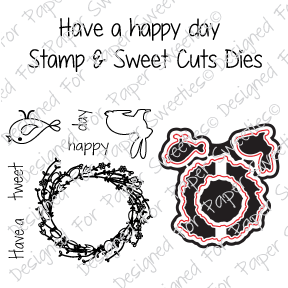 I had lots of fun making this Easter card!  I hope you take a peek at the list below of my talented teammates to view more inspiration!


Debbie is releasing new stamp sets this month with coordinating dies called Have a Happy Day and Just a Note, which are available today for purchase!  Today I am highlighting the set Just a Note! 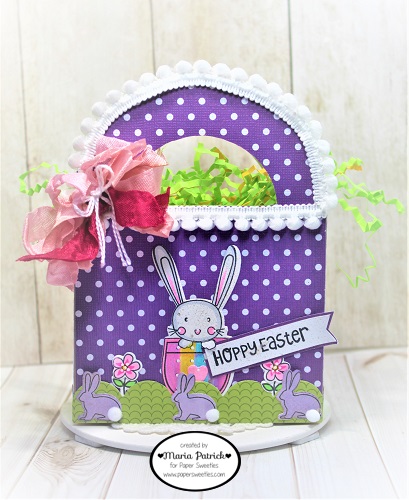 I decided to make an Easter basket with the adorable sweet bunnies!  I covered the wood Easter basket with purple polka dot paper.  Pom pom trim added for interest around the handles.  All the images were colored with copics and sprayed with gold Perfect Pearls Mists.  Tiny pom poms were added for bunny tails.  Ribbon(Bubblegum and Raspberry) tied with pearl cotton for the finishing touch. 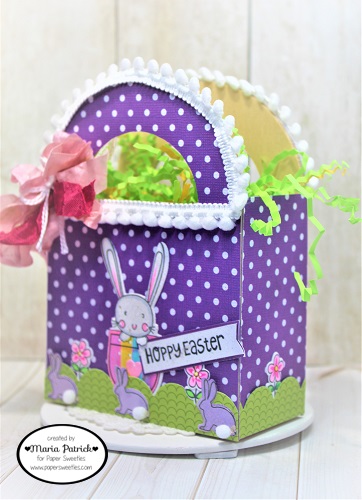 Since I couldn't resist the sweet bunny in the egg image, I decided to make a few cards... 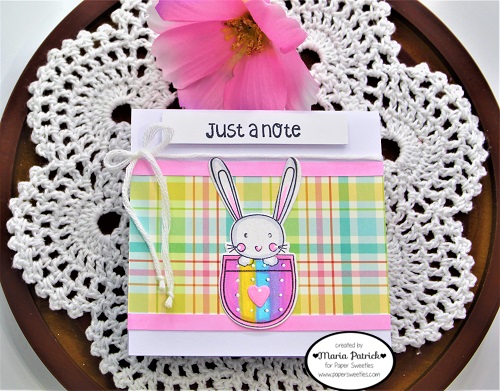 The first card's bunny was made similar to the one on the Easter basket with a plaid background.  The sentiment added at the top and a yarn bow to finish the card.


For the following cards, I decided to make chocolate bunnies, yum! 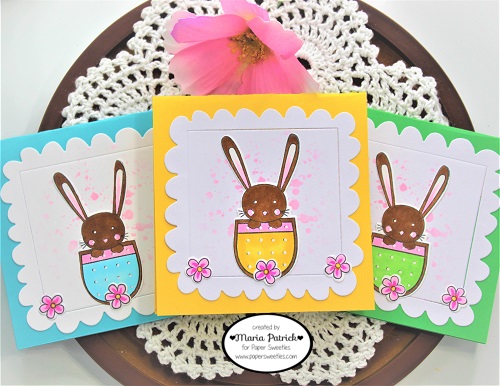 The chocolate bunnies were colored with copics.  The background was made using a stencil by Tim Holtz.  The scallop frames are from the set Sweet Cuts-Square Scallop Frames. 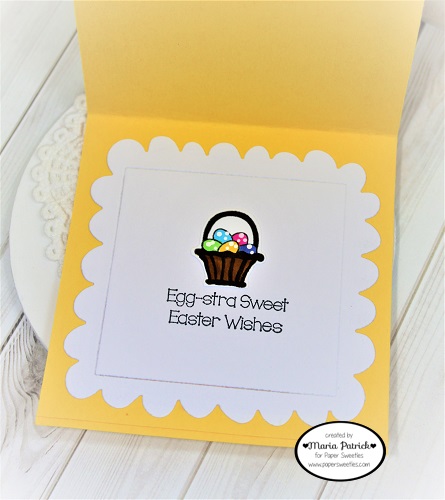 The inside of the card with an Easter basket filled with colorful eggs.  The basket and sentiment is from the set Jelly Bean Time.

I had lots of fun making these Easter projects!  I hope you take a peek at the list below of my talented teammates to view more inspiration! 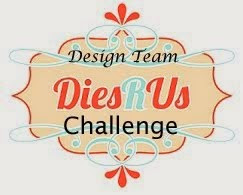 It's the second challenge of the month for Dies R Us Challenge!  The theme is (Spring Flowers).  We ask that you use at least one die on your project.  Come and join in the fun and have a chance to win a gift certificate!  Enjoy creating!  I used a new die from Tutti Designs called Tulip Bunch.  I just LOVE tulips, don't you?! 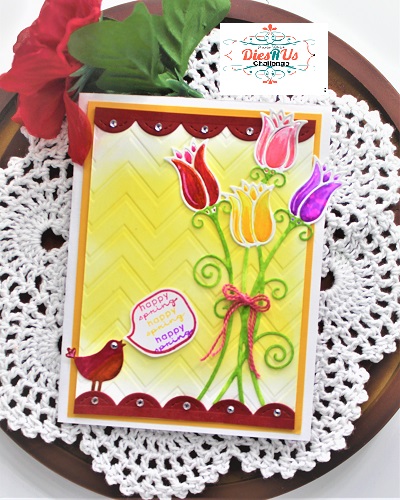 For my card, I started with a white card base.   I sponged the back ground with DI-mustard seed.  The tulips were water colored using zig markers.  The bird was die cut using a die from Love Birds.  The sentiment is from PTI.  The speech bubble is from Lawn Fawn.  He's a happy bird saying...happy spring!  And, the stitched scallop borders are from Lawn Fawn, also.  Gems added to the borders to finish the card.

All dies that were used for my card with links are listed below.  I hope you create a project using dies and join us for the challenge!

There are so many choices at the Dies R Us store!  Hope you check out the store for  amazing selection of dies, stamps, papers, inks, etc.!  I'd love to see your project in the challenge...happy creating!

Would you like more inspiration?  Check out some amazing creations from my talented teammates!

Thanks so much for taking time to visit here today!  Have a great day!
Hugs!

Email ThisBlogThis!Share to TwitterShare to FacebookShare to Pinterest
Labels: DRU

I hope you all had a wonderful Easter despite the fact that many things have changed to make this year's Easter a different celebration.  The highlight of yesterday was having church service in our church parking lot. 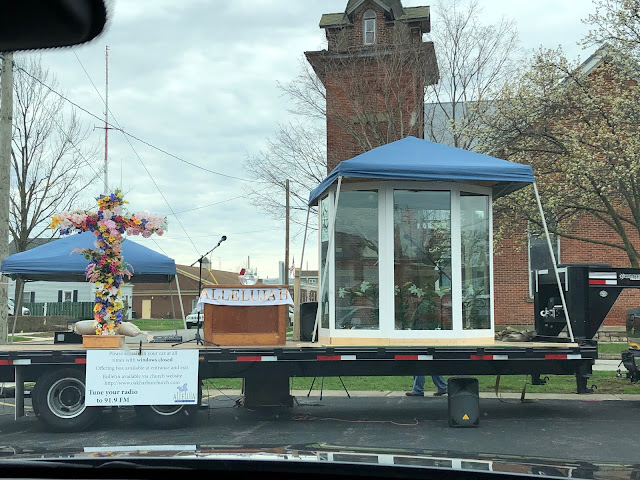 Even though we couldn't be in close contact with the pastor and other church members it was great seeing their faces!  It was fun during the service to listen on the radio and honk our horns.  I so hope that we are able to do it again next week! 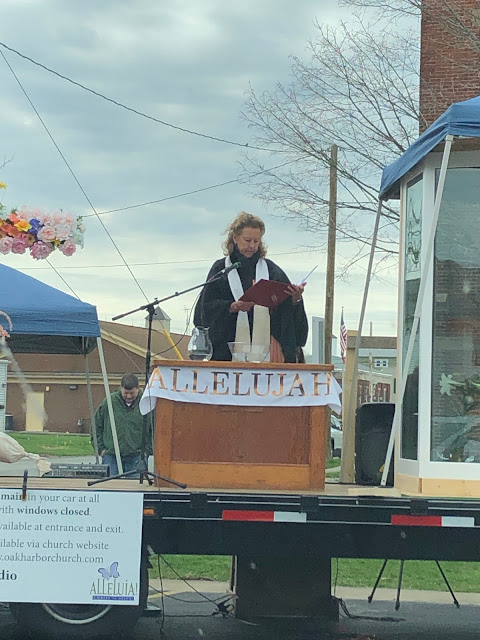 Pastor Becky has been such an uplifting bright light in our lives by streaming the services on the internet, and today was certainly a special day!  And, now onto my card.

Debbie is releasing new stamp sets this month with coordinating dies called Have a Happy Day and Just a Note, which will be available for purchase tomorrow!.   Today I am highlighting the set Have a Happy Day!  I just love the pretty wreath and sweet bird in this new set! 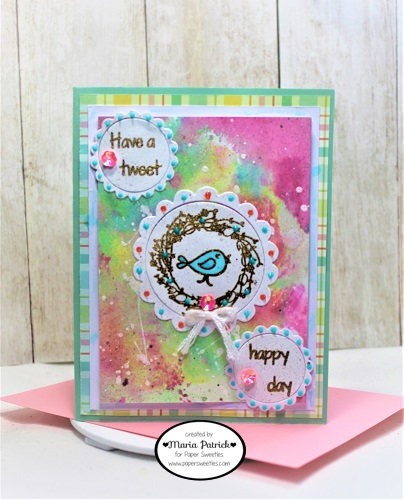 For my card, I started with a mint card base.  The plaid paper is from Echo Park.  The background was made using distress inks of cracked pistachio, mustard, seed, picked raspberry, and broken china using the "smoosh" technique.  The wreath, bird, and sentiments were embossed in gold.  The scalloped circles are from the set Sweet Cuts-Circle Scallop Frames.  Nuvo Drops of Strawberry Jewel and Caribbean Ocean were applied to the scallop circles.  A yarn bow and sequins (Bubblegum) to finish the card.

I had lots of fun making this "tweet" card!  I hope you take a peek at the list below of my talented teammates to view more inspiration!

Maria
Welcome to my blog! I am married and I'm a retired nurse. I have one son, Jeremy, and a sweet dog named Sheila. I enjoy many different crafts, but especially cardmaking! I hope you take a look around on my blog and enjoy! Take care and have a wonderful day!

Blessings and hugs to you! 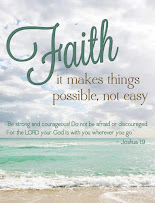 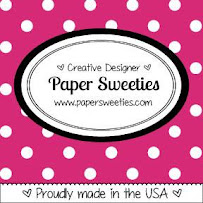 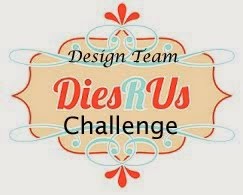